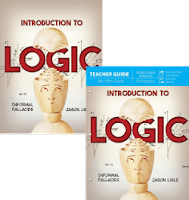 Introduction to Logic Curriculum Set
Welcome to the World of Logic!
Logic is the study of the way God thinks. So, by studying logic, you are actually doing theology! Knowing how their Creator thinks will give you an edge over secular questions.
at July 22, 2019 No comments:

Email ThisBlogThis!Share to TwitterShare to FacebookShare to Pinterest
How Powerful Is Prayer?

When the atomic bomb was dropped on Japan during WW2, 92,000 people were killed, but when Assyria besieged Jeruslem causing King Hezekiah to cry out to God in prayer on behlf of his people, God sent an (1) angel that slew 185,000 Assyrian soldiers in one night. Hezekiah's prayer was twice as explosive as the atomic bomb. That is Powerful. If prayer is strong enough to destroy armies, how much more power does that give us to pray and defeat the enemy?  Prayer Is Power!   Use It!
at July 22, 2019 No comments:

Email ThisBlogThis!Share to TwitterShare to FacebookShare to Pinterest
Good Morning. Confess: I declare, God's Word affects everything in my life today!
at July 22, 2019 No comments: